My 136th recipe, "Kovakkai Masala (Ivy Gourd Masala)", a delicious side made with one of my favorite veggies. While I have spoken much about my love for kovakkai in my earlier post, this time around I thought of sharing some interesting facts about kovakkai (Ivy Gourd). Kovakkai is technically a fruit which is native to Asia. Though it is a fruit, it doesn't taste sweet and is treated as a vegetable in Indian cuisine. While it is a delicacy in Asian cuisine, it is considered as a weed elsewhere, especially in Hawaii, Florida, Texas, Australia. Kovakkai grows on a vine and it is considered a weed since it is very invasive to the native plants and the vine can grow upto 4 inches per day blanketing other plants from sunlight. Whichever way the little kovakkai maybe treated, no one deny that fact that it has an excellent medicinal value. Kovakkai possesses mast cell stabilizing, anti-anaphylactic and antihistaminic potential and is know to treat joint pain, leprosy, fever, asthma, bronchitis and jaundice. When I read about all these great benefits, I was so thrilled at knowing that one of my favorite veggies was healthy too 😉 I generally tend to prepare the Kovakkai fry week after week, since that is how I like it. However once in a while I make this Kovakkai Masala since RK likes it when I cook the veggies in a onion tomato based masala. Anyways no complains as long as I get to eat my favorite Kovakkai 🙂 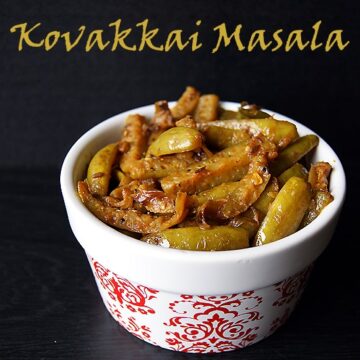 - You can cut the kovakkai as you desired.
- Add some extra oil in the last step, if your kovakai gets stuck to the pan while sauteing.
Sending this recipe to the First Blog Anniversary Celebration of Delectable Flavours.