My 316th recipe, “ Corn Flour Halwa | Karachi Halwa | Bombay Halwa Recipe ”. A super silky, soft and melt in your mouth Indian dessert. It is quite the popular Indian sweet dish. A dessert which combines just a few basic pantry ingredients.

And a pretty straight forward method to come out with an outstanding recipe, perfect for special occasions. Refer to the making video on my youtube channel here.

I am now into the habit of posting an easy halwa recipe whenever there is a milestone post in my blog. I started it as fun with Tirunelvi Halwa being the 100th Post and then the last one was Cherry Halwa for the 300th Post.

Today is certainly not a milestone from the recipe count perspective. However, I got myself a new induction cooktop and a proper camera stand to capture better recipe videos.

Today was the first time, I was trying that setup for a recipe. Hence decided to start off with a traditional recipe. One which is special and an ideal Halwa recipe. One which needs minimal ingredients to prepare and not much time.

While I am a big fan of Indian desserts now, it was not the case when I was young. I used to gorge upon countless chocolates and candies, but was a very picky eater when it came to Indian sweets.

To start with, I was only attracted to a few Indian sweets which were colorful. Specifically those made during various Indian Festivals.

So whenever my mom took me along to a sweets store, I would either choose the badam halwa or colored mini rasgullas or the corn flour halwa. Sold in bright green / orange / red colors, wrapped up in individual plastic wraps, the corn flour halwa was always an attractive bet for me

The only qualms I have with the halwa sold in store is that, it is made with oil and slightly bouncy in texture. I love my Corn Flour Halwa to be flavored with ghee instead and with a comparatively softer texture. Something which holds up like a jelly, transparent to the right degree and just literally melts in your mouth. This CornFlour Halwa recipe I am posting today checks all the right boxes.

The recipe for corn flour halwa is pretty simple. It is just about cooking the corn flour in a sugar syrup until it reaches the right halwa consistency. Having said that, the tricky part of this recipe is to get the halwa glossy.

If you miss out on the right texture, the halwa would still taste delicious but it would appear gloppy. That is exactly what happened during the first 2 attempts I made to recreate this halwa recipe for the blog.

It took me a little time trying to figure out what went wrong. I was pretty sure that there was nothing wrong with the quantities or procedure.

Only then I realized that the Corn Flour sold here in US is different in texture to what is sold in India and elsewhere. It is slightly coarse in texture and when I used it for the halwa recipe, it was the primary culprit in turning the halwa gloppy.

I tried swapping out Corn Flour with Corn Starch. Corn Starch was more smoother in texture and worked out perfectly for this recipe. Triumph at last 😉

The perfect Bombay Karachi Halwa recipe to celebrate any special occasion. Or for making during the festival season. Even doubles up as an easy Diwali sweet or festive occasions 🙂 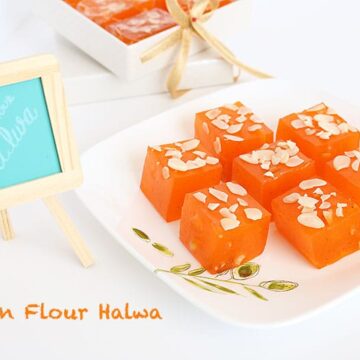 - The more you cook the halwa, the harder will be the texture. So, cook the halwa until your preferred texture / right consistency. Chewy halwa will not taste good. - This easy recipe helps to achieve a melt in your mouth delicious halwa. And not a chewy texture. - As I have mentioned earlier, if in US, use Corn Starch for the recipe and not Corn Flour. If in India or other areas, you can try with Corn Flour. - Adjust quantity of ghee as needed. You can stop adding ghee, when the halwa stops absorbing the ghee anymore. - I used a combination of sliced almonds and cashew nuts. - Use a non-stick pan or heavy bottomed pan, so that the halwa doesn't stick to the bottom.
« Broccoli Cheddar Soup Bread Bowl
Vegan Cinnamon Roll »