My 181st recipe, "Quick Cinnamon Raisin Bread", a comparatively quicker version of a wonderful cinnamon raisin bread. When I stayed at a Comfort Inn Hotel during my vacation, I was introduced to a cinnamon raisin bread for the first time via the free continental breakfast. Since cinnamon and raisin are two my favorites, it was an instant hit. The next time I tasted the same in Kalachandji's restaurant in Dallas. I immediately registered in my mind that I should try baking one at home. After baking a regular bread earlier, I realized that even though the bread is soft n delicious people were not very appreciative of the fact it takes a few hours to make one. While using a regular dry yeast gives you a softer and fluffy bread, I could not think of a reason why we should not make use of a rapid rising yeast to quicken the process. After all homemade breads are supposed to be rustic and not artistic. You always might not have a few hours at your disposal to bake a bread the traditional way. I found a recipe on the web to make a cinnamon raisin bread using instant yeast. I adapted the recipe slightly to come up with a version which uses a rapid rising yeast instead. The bread itself was super easy to make and it was soft and super delicious. It is surely worth baking one, at times when you have only about an hour or so and want to make your own bread at home 🙂 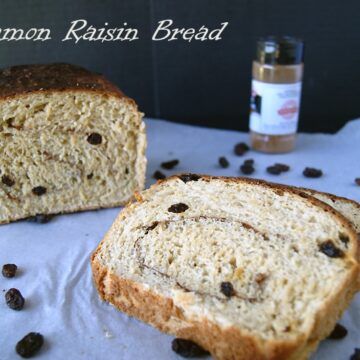 - You can use bread flour instead of the all purpose flour to get a more softer bread.
- This recipe uses rapid rise yeast. You can also use instant yeast. The process will be the same. But in step 3, you would need atleast 1 hr to get the dough slightly bubbly. Also, in step 6, you will again need atleast 1.5 hrs to get the dough to double in size.
- Before baking, make sure that there are no raisins on top. They would burn while cooking.
- Add warm water for making the dough. Cold or too hot water will kill the yeast.