My 240th recipe, "Potato Stuffed Mirchi Bajji | Milagai Bajji | Banana Pepper Fritters", a classic Indian tea time snack.  I absolutely love beaches. A couple of years back I made a visit to the famous Miami beach and I had a blast there. From that day I am very eager to make my next visit. However beach is not something new to me. I grew up very close to the famous Marina beach in Chennai. It was just a stone's throw away from my house. Though I am so fond of it, I rarely visited it 🙁

If you stay close to a tourist place, you might not have a great interest in it. I realize how true that statement is. Even though I visited Marina beach only rarely there is one thing I never used to miss during my visits. The mirchi bajji they used to sell in the beach was one of my favorite snacks.

My mom made all kinds of bajji at home like onion, potato, etc. However she never used to make the elusive mirchi bajji. So the only chance I would have to taste one is during the visits to marina. The mild spiciness and the crunchiness from the chili perfectly matches the crispiness from the fried batter making it one heck of a snack. 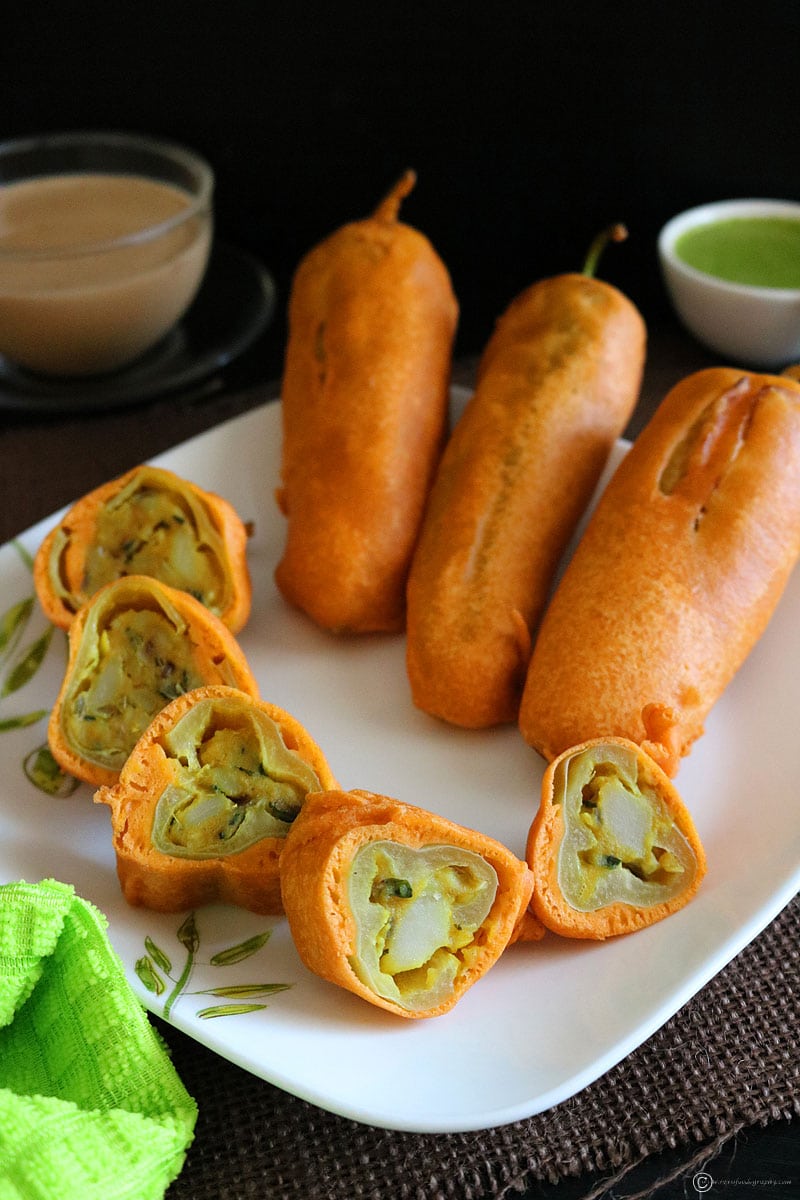 Since I do not get the small bajji milagai here, I chose to make use of the banana pepper. And it seemed like it had a large room for a nice stuffing. Thinking that a potato stuffing will only add more deliciousness to an already delicious snack, I went ahead with that idea. At the end, the potato stuffed mirchi bajji was truly more than what I had anticipated. It turned out to be the perfect snack for a cool fall/winter evening 😉 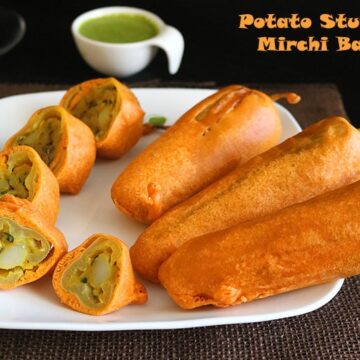 - Traditionally, bajji milagai, a South Indian Chili which is not spicy is used for this recipe. Since I could not find it here, I used banana peppers, which are similar. - Make sure to remove all the seeds of the chili. The seeds carry the most spiciness in the chili. - Adjust the quantity of batter and stuffing based on the size of your chili. - The batter should not be too thick or thin. If thick, it will form a thick coating around the chili. If thin, the bajji will absorb more oil. - Adjust the red chili powder quantity as per your taste. - While deseeding the peppers, be sure to wear a glove or use a spoon.
« Eggless Pumpkin Bundt Cake with Yogurt Glaze (Vegan)
Sesame Mushroom Chilli Noodles »