My 281st recipe, "Kale Poriyal | Indian Style Kale", a quick, easy and healthy side. Kale is a super healthy food and a rich source of many vitamins and nutrients. It is now making its way into everyones diet. Not a day goes by with encountering a kale recipe on Pinterest or other social media. And hence I finally decided to get onto the bandwagon too.

While growing up, greens, known as Keerai locally, got into our lunch menu atleast once every week. However there were different varieties of greens available which we called as ara keerai, siru keeri, etc. ( I obviously dont know their exact English names expect that keerai means greens 🙂 ) Each one of them had their own flavor and texture after cooking. Hence my mom used to make different kinds of dishes like masiyal, poriyal, etc. After moving here to the US, I usually only get spinach at the super market. While spinach is delicious in its own right, it wilts fully when cooked. So in my opinion, spinach is not suited very well for sauteing and hence I was restricted to making only masiyal. During the initial days, it did not make a lot of difference, but slowly I started missing my mom's keerai poriyal. 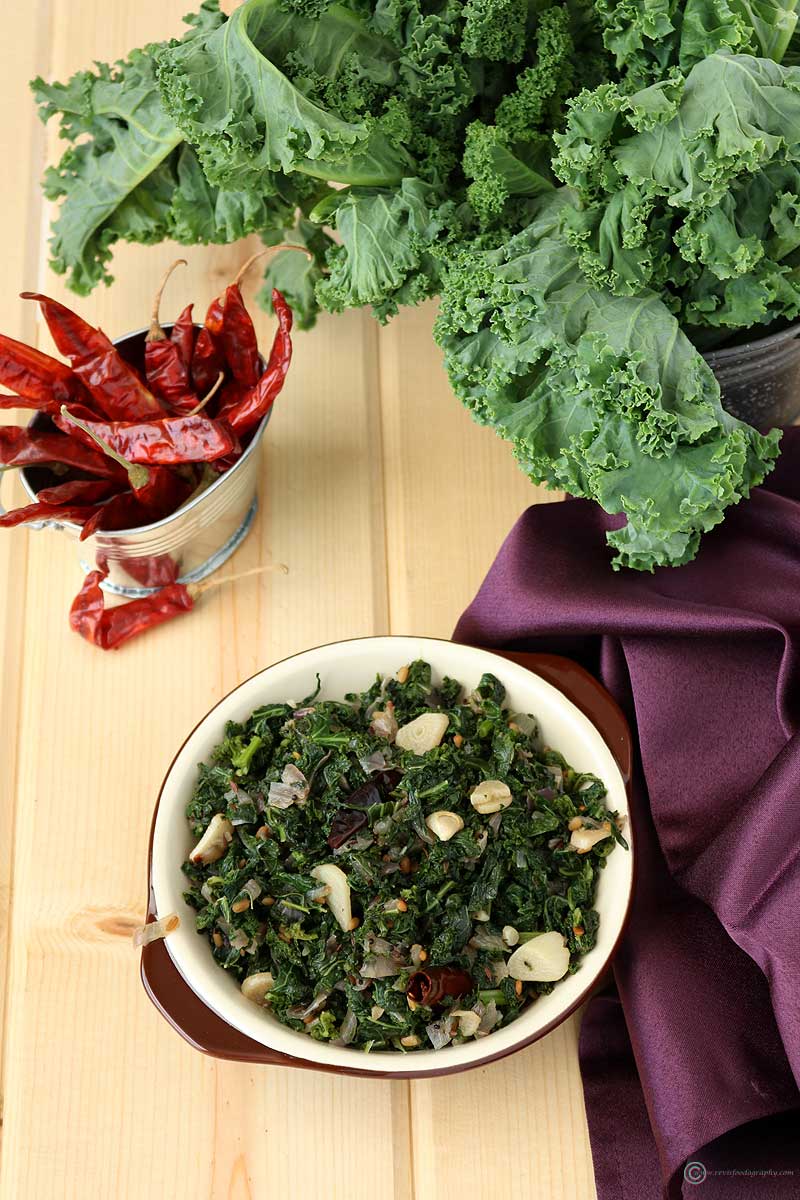 Kale is one vegetable which I always find readily available at the super markets. While I always have an eye on it, since I was not sure about its taste, I did not dare to purchase it earlier. Only recently, I got a chance to taste Kale via a packaged salad. Even though I do not like eating raw greens, I really liked its flavor in the salad. Immediately, I had set in my mind that I need to purchase kale whenever I get the opportunity. And so when I got my opportunity during this week shopping, I quickly pounced on and purchased a couple of those beautiful bunches of the bright and fresh Kale. 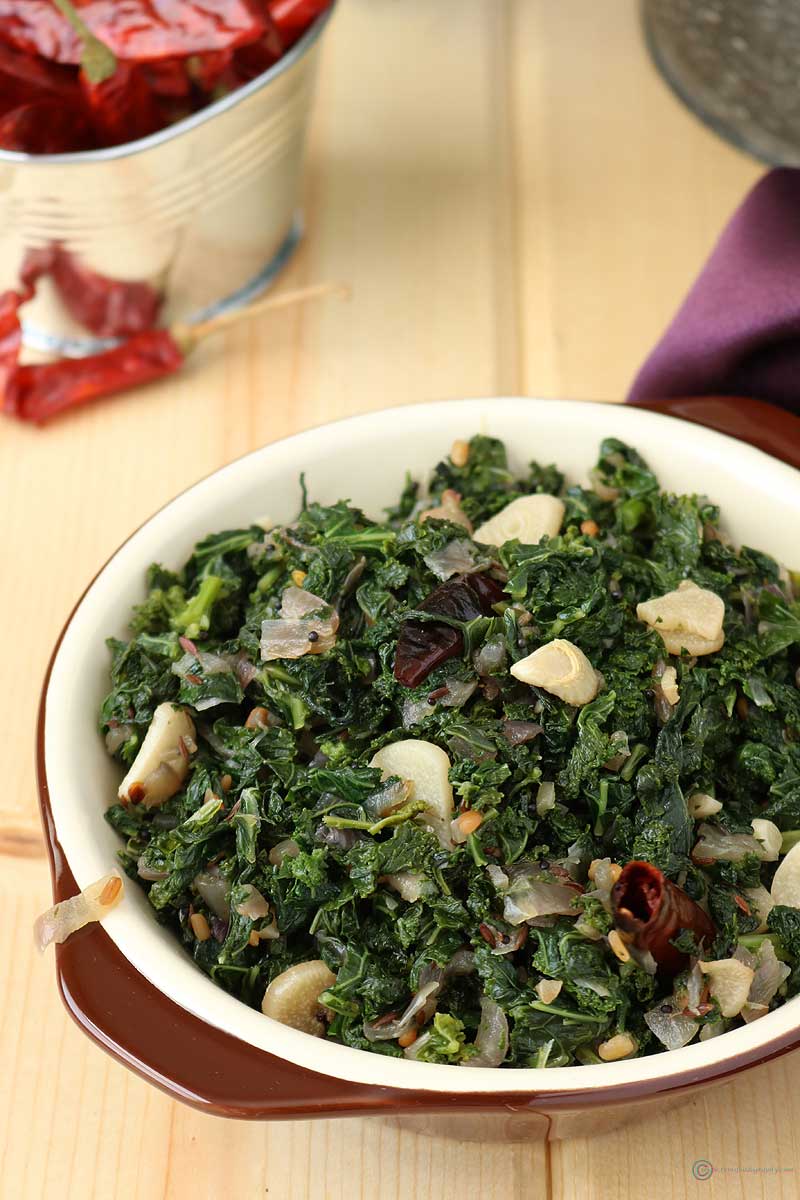 Instead of experimenting too much with the kale, I decided to go with my mom's tried and tested recipe for keerai poriyal, just substituting kale instead of other greens she used. The end result was this super delicious Indian style kale which I regret not trying earlier. Unlike spinach, the kale did not wilt too much and gave a nice texture to this poriyal. And also the unique flavor of the kale was shining through. All in all it turned out to be one healthy and delicious dish. I usually serve poriyal as a side for rice and some south Indian gravy. However this Indian style kale was so delicious that I decided to mix it with rice along with a drop of ghee. It just tasted so divine and worth every mouthful 🙂 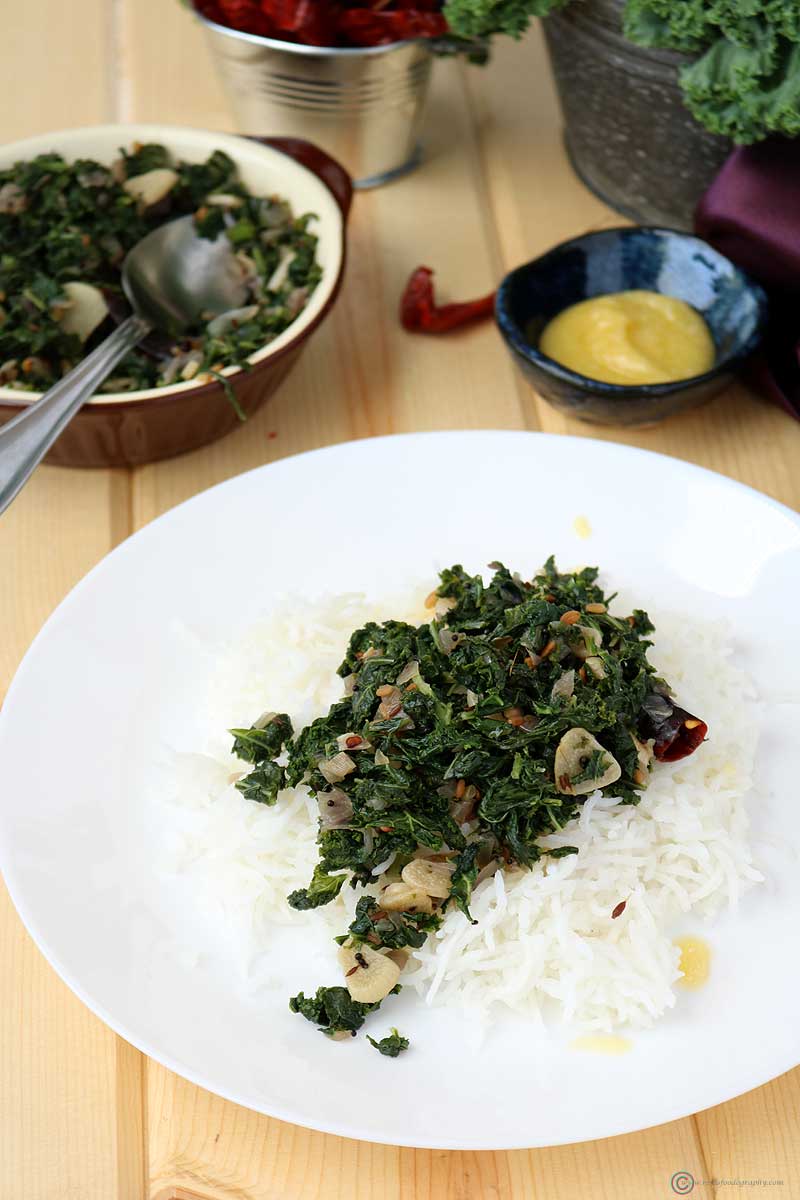 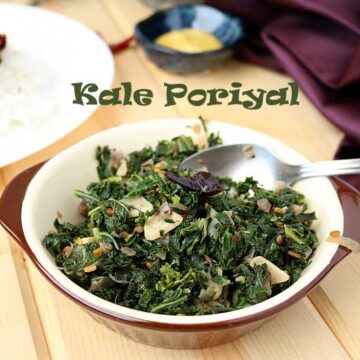 - Do adjust the quantity of garlic as per your taste preference. - Do not over cook the kale, it will taste bitter.
« Taiwanese Ice Cream Spring Roll
Kondai Kadalai Kuzhambu (Chickpea Gravy) »