My 74th recipe, "Eggless Bread Pudding", a rich and easy to make breakfast dish. I had never tasted a bread pudding until recently when I had it in a restaurant here. Among all those meat and egg dishes on the menu, this one seemed like a good Vegetarian option for me. But, until I had my first spoonful, I did not realize that bread puddings in restaurants are made with eggs.

Though the dish looked lovely and I was very eager to try it, I returned home disappointed. When I was making the Eggless French Toast a week back, an idea suddenly sparked in my mind, and I wanted to try making a eggless bread pudding using custard powder. I was not too sure how it would turn out and hence I added my two most favorite ingredients. Cinnamon and Raisin. I can never refuse any dessert which has cinnamon and raisin in it.

I love the flavor of cinnamon so much and I can eat a handful of raisins just like that. The eggless bread pudding turned out really well and adding the cinnamon powder and raisins was indeed a master stroke. It was the perfect blend of all flavors I love and the butter made everything better 🙂 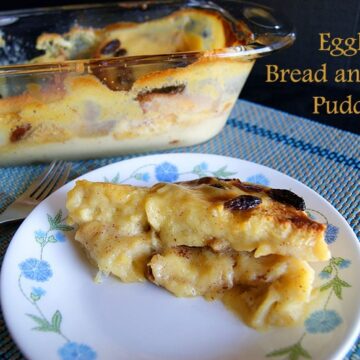 - You can also just do 1 layer instead of 2 layers. - Add less raisins on top of the pudding and more in the middle layer. Chances are that the ones on top could burn. - In case you are not able to find custard powder, use corn starch and vanilla essence instead.