My 106th recipe "Soft Chewy Caramel", my most favorite candy ever. My love for candies and chocolates started when I was very young and has grown along with me. I used to gorge upon countless number of chocolate bars and other candies never caring about what my dentist told 🙂

One of my favorite candy from childhood was the caramel flavored ones like Caramilk. At that age I never knew that they were caramel flavors, and all I cared for was that they were delicious. Hmmm, it was a long time ago I had one of them. And, time had made me forgot those lovely flavors until recently.

Few months back, When we were on a road trip in Colorado, RK stopped to refuel at a small Gas station. I don't even remember which place it was. After refueling, since they did not have the remaining change, RK returned back with 2 Caramel candies instead. When I tasted them, oh boy, they were so tasty. It was the same taste of childhood, but even better was the buttery, chewy and melt in your mouth kind of texture of the caramels.

After returning back, I tried to look for them here at Dallas. But, I could not find one which was as soft and chewy as the one I had on the trip. So was waiting for the right time so that I could make one myself. Atlast, when I made them today, I was spellbound. It was so delicious and would say that it was probably the most simple yet delicious candy I had ever tasted 😉 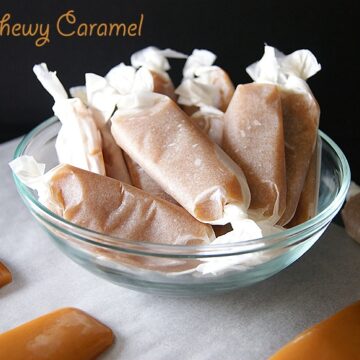