My 197th recipe, “Lychee Ice cream”, a refreshing Ice cream for the summer. Lychee is one flavor which I had tasted in ice creams, shakes and drinks while in India. I did not know where this flavor came from and it was not my favorite too. However, I still used it have it occasionally since it was kind of different from the other flavors I like. For the first time I saw the Lychee fruit in one of the local supermarkets here in the US. Only then I came to know the Lychee was a fruit and it primarily came from China. Since I do not have a great fondness towards Lychees I did not buy them at first sight. However when I started to see them repeatedly at the fresh produce section, I wanted to give it a try. Compared to the other fruits I love, this one was very light and refreshing. I particularly liked the texture of the fruit, which was similar to that of a tender coconut. I immediately knew that it would taste even better in a Homemade ice cream. When the lychees I bought, eventually ended into the lychee ice cream, I loved it. The flavor itself was subtle, yet very refreshing. It was the perfect ice cream I would love to devour during the hot summer days 😉 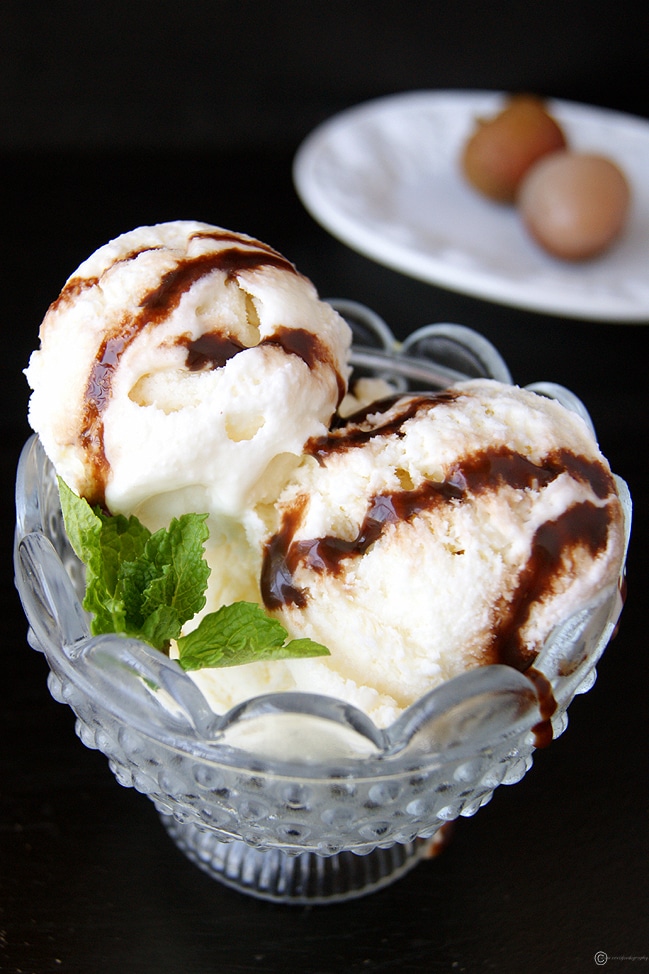 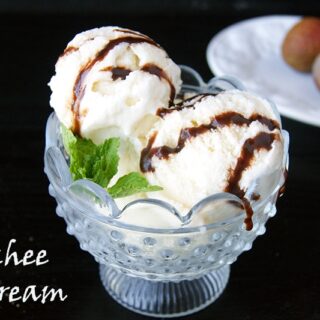 - Add the lychee to the milk after the reducing the flame to low. If the milk is still boiling, there is a chance of the milk spoiling.
- You can also skip grinding the lychee pulp, if you like pieces of fruit in the ice cream. You can also, skip filtering the milk and lychee mixture. Since I like a smooth ice cream, I used a filter.
- After adding fresh cream, just give a few pulses. Do not use the grind option of the blender or blend for a long time. Else the butter would separate from the cream and float on top.
- Alternatively, you can also pour the mixture into ice cream pop molds and freeze to enjoy wonderful Lychee pops.
- An alternate method to make this ice cream would be to use evaporated milk instead of whole milk. Add the lychees to the evaporated milk and blend into smooth paste. Filter out the remaining pulp. To the filtered milk, add the condensed milk and beat well using a hand blender. Also, beat the heavy cream using a hand blender until soft peak. Combine both of the gently and freeze overnight. This method will give a more creamier ice cream which is stronger in lychee flavor. 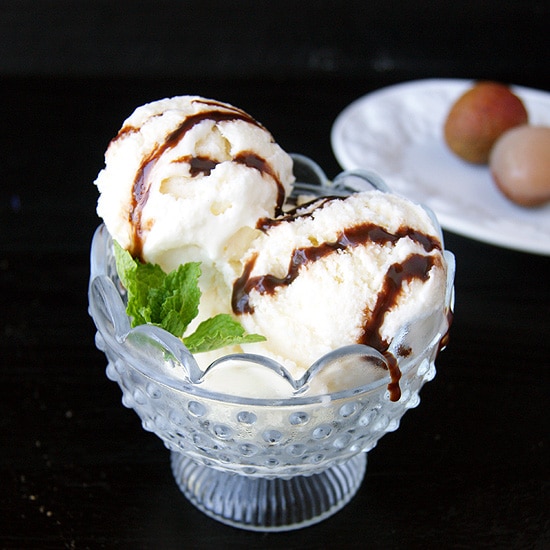